The Doorway Gallery is delighted to host an exclusive show by Sergey Talichkin entitled “Yugen”. The show will officially be launched by Editor, critic and broadcaster, Niall MacMonagle on Thursday October 5th between 6 -7.30pm, at No. 24 South Frederick St, and is scheduled to run until October 26th.

Sergey Talichkin is a graduate of Fine Arts from The Precarpathian University in the Ukraine. His work has featured in several exhibitions in Ukraine before he moved to Ireland eighteen years ago.

Based in Dun Laoghaire, he works predominantly in oils, experimenting in a diverse range of styles. His inspiration comes from the magnificence and mystery of nature and mythology, from his birthplace at the foothills of the Carpathian Mountains in the heart of Europe, to the starkly beautiful Skellig Micheál off the coast of Kerry, where Europe gives way to the Atlantic Ocean.

Since then his work has frequently been purchased at the 'Contemporary Paintings and Prints Sale' at James Adam & Sons Ltd.   His exhibitions all have been critically acclaimed, his last solo exhibition took place at The Little Museum in 2014.

Sergey Talichkin is proud to bring his new collection, “Yugen” to The Doorway Gallery.   The title Yugen, is derived from the Japanese language, meaning an awareness of the universe that triggers emotional responses that are too deep and mysterious for words.   This very meaning aptly applies to Sergey’s collection of oil paintings, that is comprised of Irish scenes such as Glendalough, Dublin Bay, Dalkey, Howth at sunrise and Ballycarbery Castle, Kerry.

The collection intends to capture a moment where the viewer considers their place amongst the beauty and power of their surroundings. 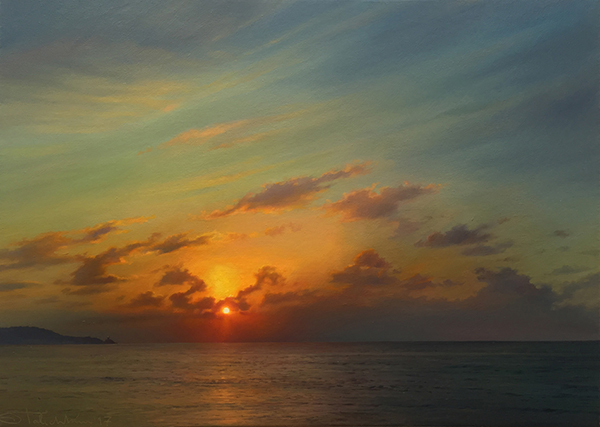