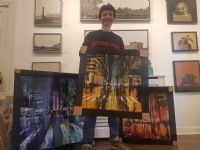 "Comfort food for the eyes of soul will surely put a smile on your heart of hearts."

Nathan NEVEN was born in 1979. His childhood passions were growing, drawing and painting everything around him.

With his strong desire to make his dream come true to become full-time painting artist, he decided to move to Paris, one of the world capitals of Arts and Cultures, attended some short courses in Art to enrich his skills and experiences.

Nathan's art captures the moments of his dream, his living in Europe and his travel experience. He is inspired by everything around that touches his soul -- the joy and beauty of life itself, the beauty of nature and her surroundings.

His influences include a diverse group of impressionist artists. He uses the play of light, texture, color and shape and the interesting juxtapositions in our everyday lives.

From 2006 he had some successful art shows which allow him to become a professional artist.

"I believe in the power of art. For me, each piece of art has a soul and possesses the ability to affect people’s lives. Everyday I feels blessed to be able to create his art. My style has centered upon color relationships, the presence of light, and a sense of energy."